The original article can read here at the RVA Magazine web page.

There’s a certain sound that rings out when PVC slams into human flesh. There’s no strategy to how I swing. It’s all per the boxer’s instruction.

Listening back to the audio, I find it especially painful to transcribe. All I hear are my swings with the four foot pipe, each swing intensifying against a sharp exhale. Eventually the exhales regress to animistic grunts, yet the swings continue. The usual soundscape of raspy radio and number counts overhead are phased out. For a moment I’m taken back to this moment, as I fell into a violent groove, belting the vinyl pipe across his abdomen. 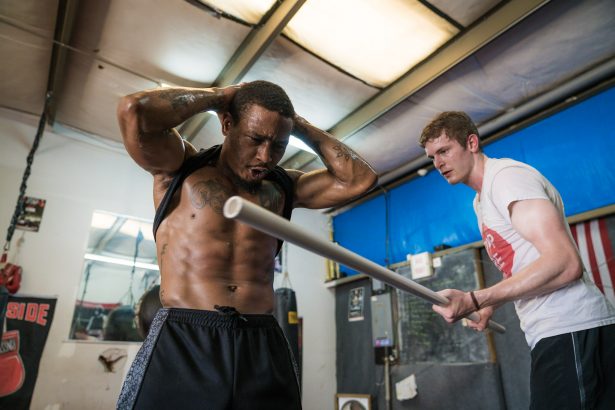 For the average individual, this could be traumatizing. But for Reggie Barnett, Jr., this is a Saturday workout, and a particularly light one for the 2018 champion pro bare knuckle boxer, who I met with at his Chesapeake boxing gym.

But according to Barnett, even champions falter on this exercise–some of my shots with the unwavering pipe nearly bring him to his knees–only to see him spring right back up for more. The fighter had not done this particular exercise in weeks, making him particularly vulnerable to the pain and all the more appreciative of its lesson. “I want to be able to deal with that pain,” he said. “A lot of people shy away from uncomfortable parts, but it’s human nature.” For Barnett, the mind takes most of the reps, 90 percent to be exact.

I stopped after several swings, figuring Barnett wouldn’t keep count. He noticed almost immediately. “We’re not done, I’ve got five more, I will not quit,” he said. “You try to break me, it’s okay, but you won’t.” This was one of our initial encounters with Reggie Barnett Jr., who earlier this month defeated Travis Thompson in the 2018 Bare Knuckle Fighting Championship. 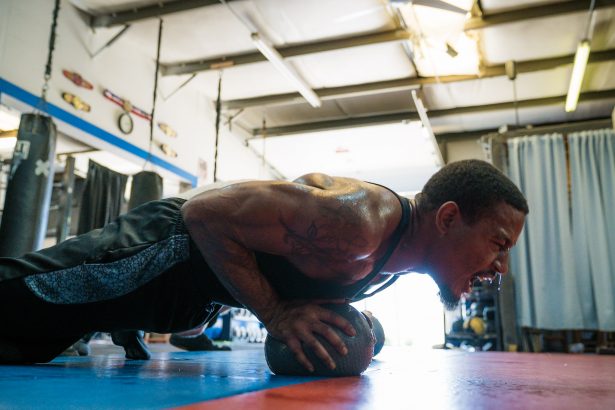 Although a champion under the stagelight, Reggie’s daily life is a far cry from the lens of fame. Aged 31, this champion, with a forensic history scarred across his knuckles, has a day job, going toe to toe with nature’s worst as a termite technician. And since notoriety doesn’t translate to cockroaches, Barnett still toils in the sand and muck, earning his living as any other under the beating sun.

Instead of studying him from the comfort of press seats, we decided to drive out to Barnett’s gym and do a workout with the bare knuckle champ. When we first walked into his gym last weekend, Barnett, who had just gotten back from his bout, was sprawled out on the mat, exhausted. Though as soon as we approached, he bounced up with excitement.

Beginning with calisthenics, we did a series of exercises consisting of five sets, each set lasting two minutes- a parallel to the length and time of each of his fights- a routine Barnett adopted in 2016 when he first began training for bare knuckle competition. “The hardest thing I’ve found about bare knuckle is the pain is different from boxing,” Barnett said.

You get hit with a glove, it’s that blunt pain,” he said. “With bare knuckle it’s that sting pain on top of that blunt force.

The championship fight, which premiered on June 2nd from the Ice and Events Center in Wyoming, featured Barnett as part of 12 bout card following a hybrid of London Prize Ring and Marquess of Queensbury – but with no gloves, and hand wraps cut-off, exposing the knuckles. While some fighters had some mid-match confusion on the rules, Reggie excelled in this space, shelling Travis Thompson with volley after volley of strikes to the face and stomach, winning the match by decision after five rounds. 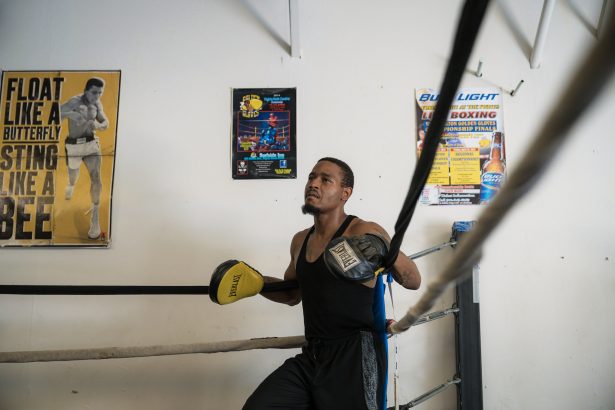 I asked how Barnett felt in the match. “It felt too short,” he said. While many rely on a second wind to steal a round, Reggie said he didn’t feel a need for that. “I was trying to finish him in the fifth, I cruised in the fourth.” And reviewing the footage it was obvious Barnett was in a category of his own and clearly superior to Thompson.

When time came for the sparring sticks, something Barnett professed as a key exercise for bare knuckle, I tried to use some of my athletic background and height advantage to catch him by surprise, but to no avail. Five minutes into the workout and him barely breaking a sweat, I struggled to keep my feet under me. By the first bell, I sprawled onto the mat, exhausted but thankful it was over. Looking up, I saw everyone staring at me, wondering what I was doing. “That was 30 seconds man, we’re not done yet.” Reggie said, picking me up.

And even with my reach and the extension of the sticks coming down in a flurry of attacks, Reggie slipped my every advance with ease, carrying a wide grin while sizing me up, pinpointing jokes on my form and leaving rounds laughing in good spirit. “Now imagine fighting and you’re trying to hit them and they’re fighting back, while you’re missing,” Barnett said. “That’s probably how Travis felt.”

Barnett fights southpaw but has had to vary his style mid-match due to injury or circumstances. “I can only use my left hand when I’m using my right. I know it sounds crazy but its how I train myself. If one goes, the other one’s coming right behind it.” With crafty footwork and a smooth transition between blocks, Reggie dons a lifelong expertise in combat embodied in every step with a playful equanimity. 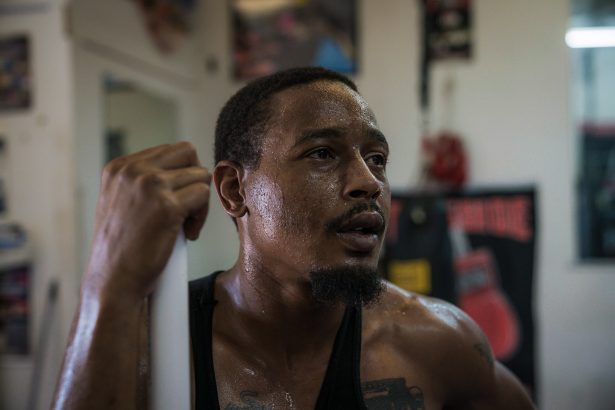 While the Bare Knuckle Fighting Championship marketed the sport as a trip into pugilist nostalgia and an understudied alternative to boxing, Reggie said it was more complex than that. “It depends on how you fight though. Bare Knuckle is how Bobby Gunn said it: Boxing is checkers, bare knuckle is chess,” he said.

Reggie fosters this analytical understanding from an eclectic base, having experience in Muay Thai, Taekwondo, and an understanding of energy manipulation rooted in Wing Chun Kung Fu. “It’s all based off manipulation of energy,” Reggie said, adding, “I don’t just study boxing, I study martial arts. If you punched at me, I manipulate your energy. A good wing chun practitioner would manipulate your energy without getting tired.”

By the end of the workout, before the final buzz sounded and my best advances had left me sprawled on the floor, I looked up to see Reggie; poised, resplendent, king of his space, if just for a moment, floating across that ring.

Some other photos of Reggie Barnett, Jr. can be found below: